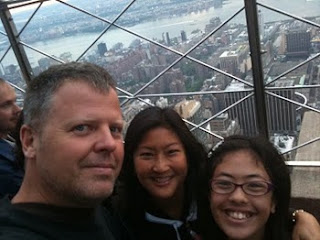 Pastor Dale and his family
Here in Maui, I go to a church called Waipuna Chapel. In my time here, I've gone to several churches but this is the one that feels the most like home.  It reminds me a lot of Clear Lake Presbyterian Church, the church I grew up in with a lot of nice families and loving people. The church loves YWAMers and always supports us in our overseas trips. The pastor there is named Dale Gustafson. I'm not personally close to Dale, but I have a lot of respect for him. I have seen him meeting with some of the guys from YWAM, sitting on our driveway with them and I'm so glad he takes the time to disciple our guys. He also preaches Biblically sound sermons that make me think and often laugh.

This week Pastor Dale announced to the church that he has been diagnosed with Multiple Sclerosis. His accompanying message was very powerful as he explained how life with the Lord isn't a formula. It's not that you do good things and only good things happen to you or that if something bad happens, it's because you've done something bad. I think the story of Job pretty much refutes that idea. It was interesting to hear how some people had already reacted to the news. One person told him that if he had enough faith, he would be healed. That's a pretty ignorant thing to say to a pastor. Having a lot of faith doesn't prevent you from hardships. If anything, the Bible implies you will have more hardships. Pastor Dale's transparency was encouraging and I think it will open new doors of intimacy for the church. After his message, the whole church surrounded him and prayed for him. I think that's the way the church should be.

I don't want to add people to the list of people I know with MS. But unfortunately this is the case. So, now in April when I ride in the MS150- the 150 mile bike ride from Houston to Austin, I have another person to ride in honor of. I will be riding in honor of Sara Stanford and Dale Gustafson. I pray I won't have anyone else to add to that list. Please pray for healing and strength for Sara and Dale as they live their lives with this unpredictable, debilitating illness. And pray that we can raise enough money to end MS forever.

My MS150 Fundraising Website
http://main.nationalmssociety.org/site/TR/Bike/TXHBikeEvents?px=8933909&pg=personal&fr_id=15941
Posted by Liz "Hot Stuff" Hightower at 11:50 AM