I really enjoy living in Paia. I lived here during my DTS and SBFM and for most of my time on staff. I was leading a team in Bangladesh when our base moved up to Haiku and the house there has never really felt like home. So, I am glad to be back in Paia. My favorite quiet time spot in the whole world is Paia Bay, which is only a short walk from my house. We have great restaurants (though I can’t afford to patronize them as much as I like), celebrity sightings, coffee shops and cute little surf shops.

We also have an abnormal amount of hippies per capita. I don’t mind hippies but they tend to smell like body odor and patchouli oil, which makes me careful not to breathe in deeply around them. They are super friendly and will gladly hug you or give you weed. There is definitely a large drug culture here, which is not good but contributes to the overall feel of the town. We even have a store called Hemp House where the hippies can go to purchase overpriced products made with hemp. There have been several Woody Harrelson sightings there. More than once I have been walking to my house and offered some “bud”, or “Maui Wowee” or my favorite, “herbs”. Do you think they meant thyme or paprika or maybe even cinnamon? I think I have seen more people blatantly smoking weed in public in Paia than anywhere else.
The other day, my friend Daniel was walking through town. He’s Indian so if you weren’t paying close attention, you might think he is Hawaiian. Some tourist guy approached him so Daniel said, “Hey, what do you want?” Then the guy said, “I want, I want” with a knowing look. Daniel was confused at first and then told the guy he didn’t do that stuff. The guy got embarrassed and then asked where the beach was.
Besides the hippie, stoner vibe, there is a large emphasis on spiritualism in our town. Maui is a Mecca for New Age and Eastern religions. Our town has a Buddhist temple at the South end, the West end and the East end. There would probably be one at the North end if there wasn’t that little body of water called the Pacific Ocean blocking the way. Everyday I pass by one of the Buddhist temples. The other day there was a blond woman kneeling down and bowing to the stupa, what my base director calls a “demon magnet.” It’s supposed to be a place of spiritual enlightenment and the Dalai Lama even came to town for its opening. It’s still strange to see non-Asians practicing Buddhism. Buddhism is just so opposite of our Western culture. It’s hard to understand how Western-minded people come to follow Eastern religions. I even recently heard that Julia Roberts has become a Hindu. Talk about strange!
Paia also has its prominent residents. There is an old guy named Maurice who walks around collecting cans. He’s a nice little guy but if you get too close, he might give you a hug. There’s also a guy named Bob who we like to call “Hair shirt Bob pants.” He looks pretty much exactly like Santa Claus only instead of wearing the red suit, he often just walks around shirtless with his wooly beard acting as a shirt, hence the nickname. There’s also another old guy we call Paia Dave. He wears tattered hobo clothes with a top hat. Unfortunately he’s been known to frequent the nude beach sans top hat. Eek!
So, Paia has a lot of character and a lot of characters and is definitely never boring. I am glad I get to end my YWAM career here. 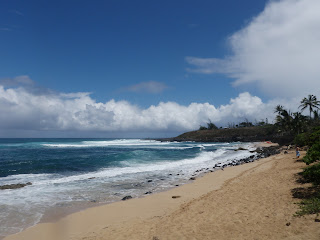