Party at the Food Bank

This Saturday our whole DTS, students and staff volunteered at the Maui Food Bank. We got there around 5:30pm for the final shift of their annual food drive. There were tons of people there. Several groups consisted of teenagers and a trying to be hip, goatee-wearing adult which immediately identified them as church youth groups. It was pretty chaotic and we didn't really know where to go. We were quickly split up and my group was assigned to unload boxes and bags of food into shopping carts. I had never seen that much SPAM and Vienna sausages in my life!!! I am sure much of the food came from people's pantries and people in Hawaii LOVE SPAM! They even serve it at McDonald's.

Unloading boxes and bags of canned goods was kind of a random task but we tried to make it fun. We would race to try to grab the bags and then rip them open as fast as we could. The whole place was kind of like an organized chaos. Some guy shoved a shopping cart into me and I totally backed myself up into an elderly woman. The whole time we were working, we were cracking jokes, which made the time pass by quickly. My students are really fun and it was awesome to bond with them during the time.

After we finished one truckload of food, we got to take a snack break. It was kind of funny since we hadn't worked particularly hard or for particularly long. I enjoyed my gatorade and cheez-its, nonetheless. After our break, the second truck arrived and it was back to taking potted meat products out of bags and depositing them into our shopping cart.

The second truck was unloaded pretty quickly. Then some tall guy in a Christian T-shirt told us to go get pizza. Who doesn't love pizza? We started running towards the pizza, when some man with a bullhorn told us, "No pizza. You're not finished." What a letdown! We felt like gluttons but we'd only been running towards the pizza because Christian T-shirt man had gotten us all pumped up about it. So we walked back into the warehouse with our tails between our legs. We ended up cleaning up for about five minutes and then were told we could get pizza. It felt like a trick, so we slowly walked out to the tents where the pizza was. This time we did actually get to eat it. After working at the food bank, I went over to my friend's house to watch Betty White on SNL. A good end to a good day! 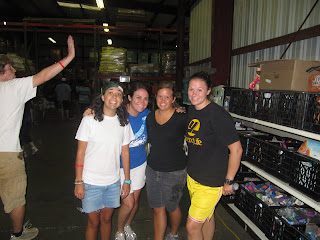 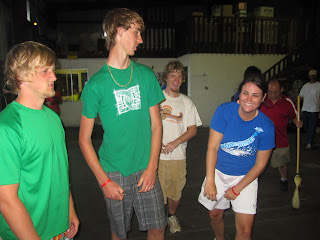