Bikes, Soccer and Rats, Oh My

I had an eventful Saturday. I went on a bike ride for the first time in about four months. I love to bike in Houston but I don’t like it as much in Maui. For one thing, it is always very windy and for those of you who’ve ever tried to bike in the wind, you know it is no fun. Also the roads are a bit dangerous, especially the ones near our base. There are several points where the shoulder is only a couple feet away from the edge of a cliff. With all these tourists driving their Jeeps, Sebrings and Mustang convertibles, one wrong move could bump me off the edge into the ocean far below. So, on Saturday I packed my bike in my car and drove to my friend, Kristy’s to start our bike ride. Her house is not on a windy cliff-filled road, so it’s a lot less dangerous area. Kristy dressed like she was going to the beach with casual clothes,flip flops and no helmet. I, trying to show off how hardcore I am about biking, wore a helmet, black spandex shorts (under my basketball shorts- I am not THAT hardcore) and my bike shoes. I have clip-in pedals that connect my fancy shoes to my fancy pedals.

Kristy and I rode to a nearby beach and sat and talked. It was fun to catch up and the ride there was a breeze. The ride back was not as we rode against the wind. We finally made it back to Kristy’s. Her house has a short but steep driveway. As I was riding up, I realized that I didn’t have the momentum to make it all the way to the top of the driveway. I realized that I needed to quickly unclip my feet from my pedals. I got my right foot out but there was no hope for my left. I made a strange high pitched sound and down I went, still attached to my bike. It took me a while to get untangled and once Kristy saw that I was okay she laughed at me the way my little stunt deserved. I felt pretty dumb but at least Kristy got a good laugh. I am a little sore and bruised but nothing permanently damaged except possibly my pride.

Later in the day, I decided to go play soccer. A bunch of people from YWAM go play soccer every Saturday and I had been meaning to go for a while. Just like the book, “Stuff White People Like” says, I like the idea of soccer. I am not particularly good at it but I would like to be. Basketball is more my game but there don’t seem to be as many opportunities to play basketball as there are to play soccer. Some of my students were playing so I figured it was a good idea to try to bond with them through athletic activity. I strategically placed myself on defense so I wouldn’t have to worry too much about my ball handling skills. I can kick but I don’t always know where it is going to go. Luckily our goalie was 6’9” so there was a large margin for error. It ended up being a lot of fun. I have such a low opinion of my soccer skills that whenever I mess up, I don’t really care and whenever I do well, I get so excited. I am no David Beckham, but at least I didn’t make a fool of myself.

Later that night, I watched a TV show with a friend until 11pm. Then I went into our kitchen to wash my dish. When I turned on the light, a big rat was staring at me as if I were the one trespassing in his kitchen and not the other way around. I didn’t want to scream and wake up the whole house but I definitely made a weird little yelp that was probably similar to the sound I made earlier that day when I fell with my bike. I didn’t know what to do. At that same time, I saw a giant cockroach. I tried to hit the less creepy enemy with a spoon but missed the roach and scared the rat. The vermin ran towards the front door, which was unfortunately where I was headed. I heard a little yelp and later figured out it was a housemate who’d been coming in the door at the wrong time. I didn’t feel safe walking out to my room in the direction the rat had gone. There were no boys around so I grabbed one of the DTS girls, Catie. She is like 5 feet tall but fearless. She checked the area for me and gave me the all clear to go outside to my room. It was hard to sleep after that as I continued to imagine the rat falling on my face during the night. Ewww! Please pray that we can end our rat problem. This is disgusting! The rat incident put a damper on an otherwise pretty good Saturday. 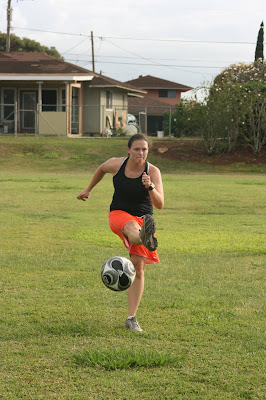