Exercising My Spiritual Gift of Cheering

Every year, my base volunteers at the Xterra world championships, a hardcore off-road triathlon held here in Maui. I am sure there are previous blog posts about my experiences with this event. Even though, I've only volunteered at the 5K/10K run event, which is held the day before the real race, it's always been fun and inspiring to help cheer these athletes on. I even thought about participating in the main event, though after finding out the actual length of the race and the qualifications to participate, I quickly abandoned that idea. Here's the website's description of the event:

The world’s premier off-road triathlon, combining a 1.5-kilometer (1-mile) swim that starts in front of the Makena Beach & Golf Resort a 32-kilometer (20-miles) mountain bike that climbs 3,000 feet up and down the lower slopes of Haleakala, and a 12-kilometer (7.5-miles) trail run that traverses lava rock, forest trails, and beach sand.
Since I quickly realized I would never be participating in this type of event, my new dream was that someone I know would do the event so that I could cheer them on. This dream has finally come true! Last Sunday, my roommate, Rachel and I went with three of my students to the fancy side of the island to watch Suzanne Vernau, someone I've known for like 15 years, compete in the Xterra. It was so much fun! I made neon signs for each of us to hold with sayings like, "Texas Girls Tri Harder," and "Hey Suz, you can't lose!" We all had a great time even though I was the only one of us who actually knew one of the participants. At one point, when we hadn't spotted Suzanne yet, Maddie turned to me and said that she wasn't sure Suzanne really existed but she didn't care because she was having fun. 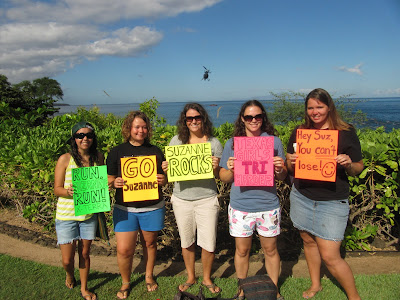 The athletes started off with a one mile swim and I spotted Suzanne as she ran by even though she didn't see me. She did very well in the swim and finished first in her age group and then moved on to the mountain biking portion. We stayed and cheered on each person until the last one came out of the water. I love cheering athletes on! I especially love it when they acknowledge you with a smile, head nod, blown kiss or a burst of speed. After all the swimmers came in, we went over to the bike area and waited for the first bikers to arrive after completing the 20-mile course. They came down a grassy hill to the transition area to put their bikes away and several people fell as they tried to dismount. It was kind of funny. The mountain biking course is hardcore and many people came into the transition area with mud all over their bodies and faces. One guy was holding his bike and tire as he ran down to put his bike up. I am not sure what happened but the tire was in more pieces than I thought physically possible. The volunteers weren't doing a very good job of directing and several people couldn't find the exit to begin their final leg of the race. We filled in and pointed and cheered to show them where to go. I think we too, deserved a free volunteer t-shirt for our services. 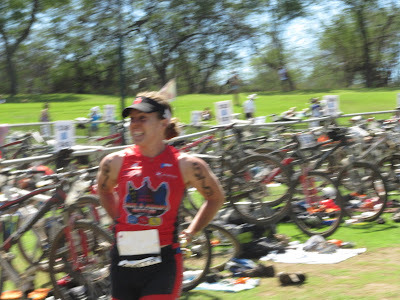 At the transition area, as she was putting up her bike and putting on her running shoes, Suzanne heard and saw us cheering with our neon signs. I could finally prove she really existed. After she went from biking to running, we waited near the finish line to cheer her on the final stretch. We got a chance to cheer more people on and it was awesome to be able to tell them that the finish line was within their reach. We cheered so much and so loud that we got our own fans. One lady took a picture of us with our signs. Another person asked if we actually knew someone in the race. We also had several people tell us how much they appreciated us. I felt very useful and fulfilled. 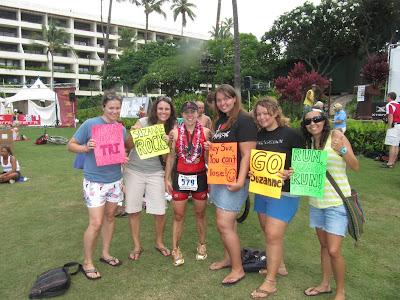 Suzanne ended up doing well, especially for her first time on this course. She finished fourth in her age group and in the top half of the overall group, which included lots of guys. She also won a free wetsuit for being the fastest swimmer in her age group. It was so fun to root her on! It makes me want to cheer the runners on at the Houston marathon, since the course goes right by my house. It also makes me want to go support any friends I have doing sporting events. Let me know if you have somewhere I can cheer you on.

Email ThisBlogThis!Share to TwitterShare to FacebookShare to Pinterest
Labels: Xterra