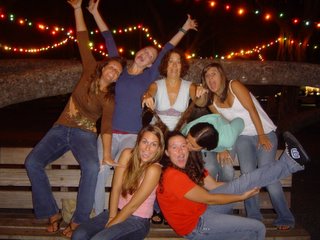 Time here moves by at a lightening fast pace. I feel like there are so many things I want to do here that I don't have time to do. I don't even feel terribly busy so I do not know where the time goes.

Yesterday I helped throw a shower for my good friend, Sherry. She is getting married at the end of January. The shower went well. It was held at this former-YWAM girl's house. Her house is super nice but it was a bit cramped with 25 people in it.

I, as usual, gave the most scandalous gift. It wasn't even my best showing. I gave a candy necklace man thong-thing called a posing pouch. It was exquisite and definitely provided the shock value I crave. I think everyone had fun.

I think Thama is having fun though I have not been the world's best tour guide. It is more like I am letting her see how me and my friends hang out. Last night my whole house minus Sara plus Thama went to Lahaina, the tourist town on island. We saw a celebrity. Keala Kennely is a famous female surfer. She was on Blue Crush on the part where the main girl is competing and nervous. Keala tells her to go for it. She was signing autographs at a store. We thought we were too cool to get one. We saw the Banyan tree all lit up. The banyan tree is this giant tree that looks like 20 trees because all the roots have grown up like separate trees. They light it up for Christmas. It looks cool. It is not as cool as the lights on the riverwalk in San Antonio at Christmas but cool nevertheless.
Posted by Liz "Hot Stuff" Hightower at 9:17 AM